The Rocket Grants are back. Charlotte Street and the Spencer Museum of Art are thrilled to announce the 10 recipients of the 2022 Rocket Grant awards.

The awardees were selected from a highly competitive pool of 65 applications. For this cycle, the jury consisted of four artists and curators with varying professional backgrounds and areas of research. Jurors included: Brandon Alvendia (artist, curator, and educator based in Chicago, IL), Matthew Willie Garcia (artist and Studio Manager at Lawrence Arts Center, based in Lawrence, KS), Nneoma Ilogu (Curator-in-Residence at the Bemis Center, based in Omaha, NE), and Cory Imig (artist and arts administrator based in Kansas City, MO). The 10 recipients of the Rocket Grants will receive full grants of $6,000 for each project, for a total amount of $60,000 in funding from The Andy Warhol Foundation for the Visual Arts.

Joel Barrett, KC Rainbow Tour
The KC Rainbow Tour is an interactive, narrated, self-guided, driving tour of Kansas City’s rich LGBTQIA+ history. During the tour, diverse voices will recount colorful socio-historical details about each location. Kansas City has played a pivotal role over the years in our national fight for LGBTQ equality, but this remains largely unknown, as LGBTQ history is often unrecorded or incomplete. Through this project, understanding our history can unite the past and present and result in a greater appreciation of both the similarities and the differences under our rainbow.

Mona Cliff, Indigenous Reclaiming Spaces / Natives Now
This project consists of a public mural in Lawrence, KS, as well as a series of public programs and community workshops. Following the Natives NOW project in Topeka, KS, this work expands to an area of Lawrence which the native community frequents the most. Haskell Indian Nations University is a multi-tribal university where Native American students attend from all over the country. In collaboration with Lawrence community organizations, there will be a ribbon skirt making workshop and a Chokecherry planting day with seed bomb making for kids.
Devin Edwards, Neighborhood Heroes
Neighborhood Heroes is a collection of murals around the Eastside of Kansas City. The murals will depict the “Crusaders” which are Edwards’s characters who grew up on the Eastside of the city and dress up as their favorite superheroes to help others in the community.
Andrew Johnson, Aja Edwin Mujinga, Bryan Sheppard, Closure is Not Justice
How do you challenge an entire city’s collective memory? This multi-media installation is an experience intended to interrogate the public memory of the 1988 explosion that killed six Kansas City firefighters, and the 1997 convictions of five innocent people from the nearby Marlborough neighborhood accused of causing the explosion. Closure is Not Justice is an interactive exhibition at a former fire station that invites the public to engage with the public memories surrounding the case and consider the public’s complicity in the wrongful convictions.
John Lewis, Spoken Easy / Slam Series
The purpose of the Spoken Easy/Slam Series is to give opportunities to artists, poets, and vocalists alike, who are getting their feet wet in the performance community. Since its inception in 2018, the Spoken Easy Series has been poetry heavy, though vocal musicians, comedians, and visual artists have been featured. This series is a fresh, innovative take on traditional open mics. Guests and artists often feel more comfortable in an urban outdoor setting, while hearing stories from the youth and veteran artists.
Nancy Meis, Paul Wenske, Isaac Cates, Chris Wenske, I’m So Glad
The documentary film I’m So Glad will explore the unique legacy of Black gospel music through the stirring music and stories of Kansas City’s pioneering greats of the past, today’s best-known artists, and lesser-known active artists. Through stories, film, photos and music – much of which has never been presented before – the film celebrates the rich heritage of the Kansas City area’s Black musical legends and contemporary artists, their impact on the development of gospel music and their contributions to the nation’s larger cultural history.
Scott Myers, Jacqueline Gafford, Frances Farah, Only the Wounds and Weapons Have Changed
This original Black History play features many lesser known people who have played key roles in the struggle to completely liberate people who were captured and shipped from Africa to America to be sold as slaves. The play dismantles what author James Baldwin called “the white falsification of history,” showing instead the whole truth by creating dialogues that could have taken place between people who were actual contemporaries. Significant scenes in the play will be staged in the non-traditional spaces of four Kansas City public libraries.
Brittany Noriega, core.
core. is an artist-run, non-commercial art zine that highlights Kansas City creators, their artwork, and their lives. It is a quarterly publication that first launched in June 2021 and showcases artists from all creative backgrounds and mediums. The zine is free to the public and currently available in 9 locations throughout the Kansas City metro area.
Kelly Nou, Fynelle Fristoe, Merrique Jenson, Nyla Foster, Tre’Shawn Seymour, Snapping Back: A Trans Women of Color Sex Workers + Artist Empowerment Project
Snapping Back will combine dance, voguing, live performance, spoken word and short documentary narratives in an interactive, curated, and immersive experience in a historic Troost venue. This project highlights trans women of color as established choreographers, dancers, performers, actresses and long-time contributors to the vibrancy, beauty and resiliency in our Kansas City artistic communities.
Regina Nouhan and Dwight Smith, ArtMoves
ArtMoves is a multimedia project of videos and podcasts produced in Kansas City. It highlights the vibrant pool of visual artists in Kansas City and the regional Midwest. Additionally, ArtMoves expands public knowledge about all aspects of visual art, including art appreciation, art collection, and behind-the-scenes presentation at various art fairs, galleries, and museums.
Jurors:
Brandon Alvendia
Matthew Willie Garcia
Nneoma Ilogu
Cory Imig 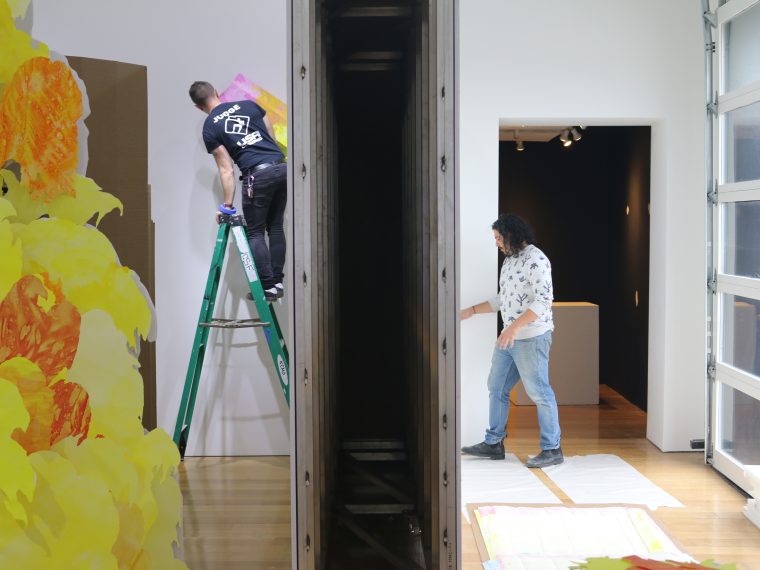 Visual art and artists are at the center of our work. We believe in the intrinsic value of experimental artistic practice and promote artistic participation in cultural conversations at the highest level.