LACE (Los Angeles Contemporary Exhibitions) is thrilled to announce the selected artists receiving the Lightning Fund Artist Grant! LACE is grateful to have received over 250 applications from artists in LA County. This year, 10 Los Angeles-based artists will be awarded a $6,000 grant for the creation and completion of a project.

This year’s Lightning Fund panelists were Ashley DeHoyos, Sandra de la Loza, and Nora Khan. The panelists were deeply impressed with the creativity and ambition of the submitted proposals. “It was a true pleasure to take in the inspiring visions and works that are unfolding amidst our robust and multidimensional arts community,” de la Loza said. Artists were selected based on their artistic merit, the potential of their project’s impact on the local community, and the capacity of their project to be achieved within the next year.

The Lightning Fund is made possible with the support from the Andy Warhol Foundation for the Visual Arts as part of the Regional Regranting Network. The Lightning Fund will accept applications again next fall. Please subscribe to our mailing list and Instagram for updates.

McKayla Chandler
Inspired after her mother’s braid book, Chandler’s project MOBETTA is a photographic series that will culminate into a two part book that honors the cultural significance of braiding and counters erasure of Black histories and expression. Through photographing intricate braiding styles, while also emphasizing the importance of archiving and documenting in real-time, MOBETTA will create an essential artifact that will live and grow beyond its book embodiment, articulating the salience of the Black community.

Heehyun Choi 최희현
A multi-channel video project, In Plato’s Cave is an experimental documentary that will reexamine and reinterpret photographs of Korean women from the 1950s and 60s taken by American soldiers who were then stationed in South Korea. In collaboration with the Korean Image Archive, the videos will investigate the female representation and perspectives towards Asian women entangled with the political and military relationship between South Korea and the United States, as most of these photographs were kept by the descendants of American soldiers and later sold at auctions or antique shops in the United States.

Leslie Foster
Nyxontology is a project that is part of Foster’s continued interest in formulating rival geographies, spaces in which the non-linear logics of Black, queer thought slip sideways into alternate topographies challenging Eurocentric and colonial geographies of confinement. The body of work will consist of an installation intended to resemble a grotto that contains a series of short stop-motion video loops portraying speculative religious icons. It combines video, tintype photography, novel object-making techniques, and installation in order to explore and expand queer, Black imaginaries through the use of dream logic.

Kimi Hanauer
The Center for Liberatory Practice & Poetry is a nomadic and virtually-based education center that gathers a community of learners around ways of being, sensing, and making that enact liberation in everyday life. In Spring 2023, the Center will launch an access-centered digital resource library of shared learnings, rituals, pedagogies, and dreams for autonomous and liberated worlds. For its inaugural collection, the platform will invite organizers, artists, writers, and members of the public to share intimate, familial, and communal practices of mourning honoring our worlds and selves in transition.

Texas Isaiah
Flowers At Your Feet is an ongoing project comprised of photographs and altars that present a space for mourning, celebration, prayer, and recollection in different cities across the US; the work asserts imagination within the confinements of gender and expands on the connectivity between transmasculinity and Black feminist practices. In 2024, Texas Isaiah will focus on completing their Los Angeles chapter of the project, inviting LA-based transmasculine people to participate in a portrait sitting, video documentation, and conversation about their experience and perceptions on gender and masculinity.

Gelare Khoshgozaran
To Be the Author of One’s Own Travels is a recent chapter in Khoshgozaran’s continued experimentation with film, to address exile and displacement; the project has three components and multi-language interpretations that come together as an installation and expanded cinema. Guided by a series of dream sequences from her own journal, and ongoing conversation with collaborators and interlocutors who live as refugees in different parts of the world, To Be the Author of One’s Own Travels uses props, images and masks to create the dissonant effects of exile on memory and everyday life.

Odeya Nini
I See You is a project that began in 2021, where Nini realizes intimate performances with people in front of their homes. Over the course of the year, Nini will travel to various communities across Los Angeles to meet with elderly folks for vocal performances as an offering of deep healing and connection.

Queer Spa Network
Community Care in Times of Drought will provide a temporary site to unpack our complicated relationship to water in a time of drought, while conjuring a healing relationship to water in a way that foregrounds collectivity. Inspired by ancestral practices with water and green spaces, the Queer Spa Network will create a multi-sensory spa experience and events series as a means to build a community network engaging in practices of care.

Felix Quintana
Love is the given of the place is a new body of work that foregrounds Black, brown, and Indigenous neighborhoods through a series of site-specific banner installations around Los Angeles.

Raymundo Reynoso
Means of Production is an ongoing series of works inspired by the posters and signs that cover the city announcing concerts, causes, celebrations, and community events. The works are intended for distribution throughout the city—displayed on public surfaces such as utility poles, fences, and board-ups—in dialogue with existing signage, graphics, and imagery. 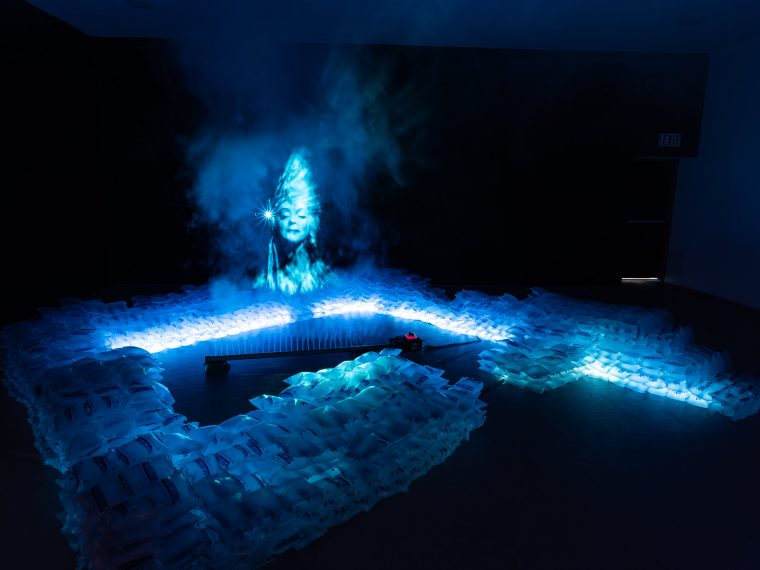